Temple Square in Salt Lake City, Utah is full of monuments, statues and tributes to the Church of Latter-Day Saints. 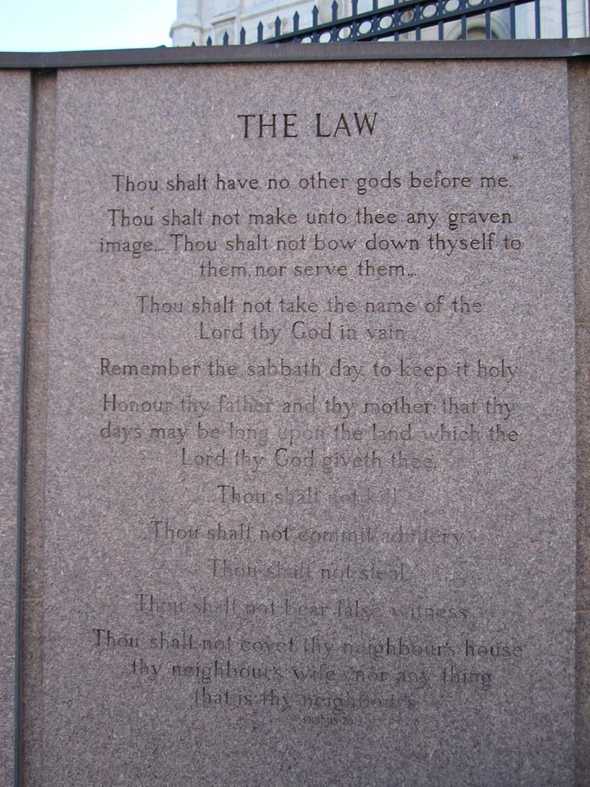 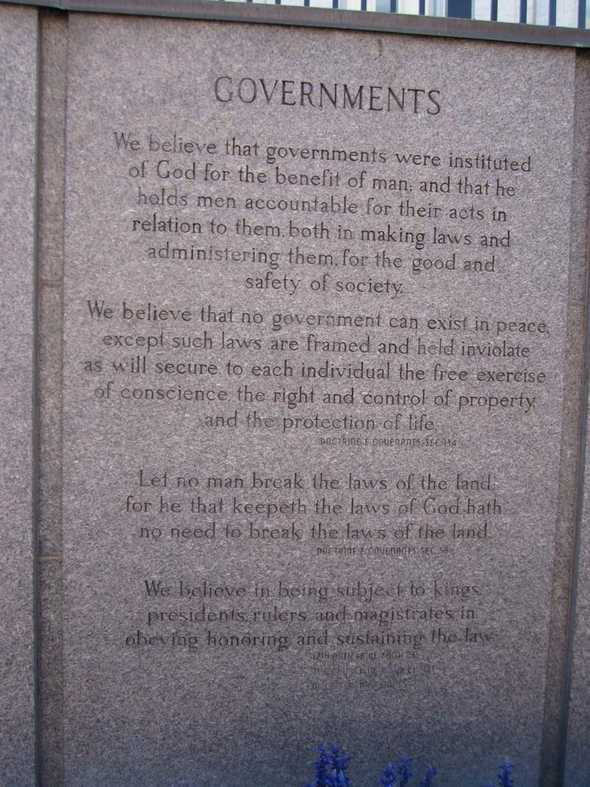 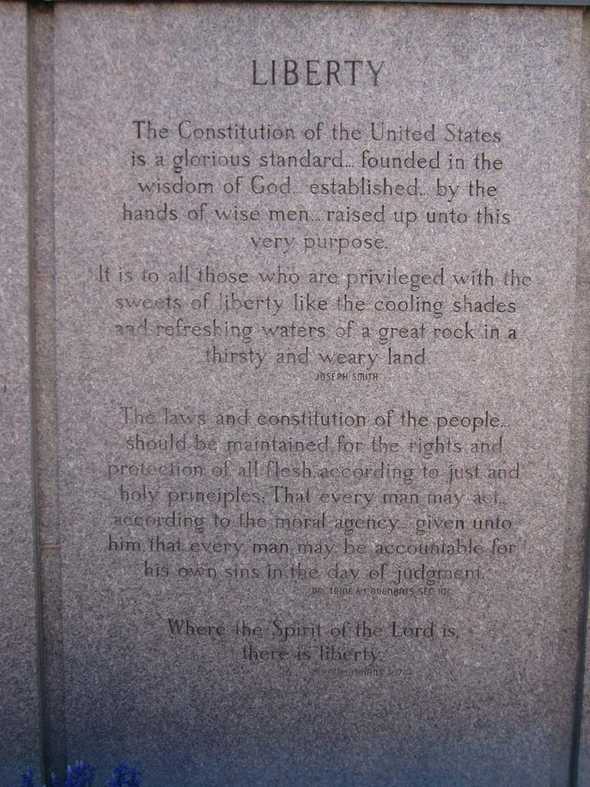 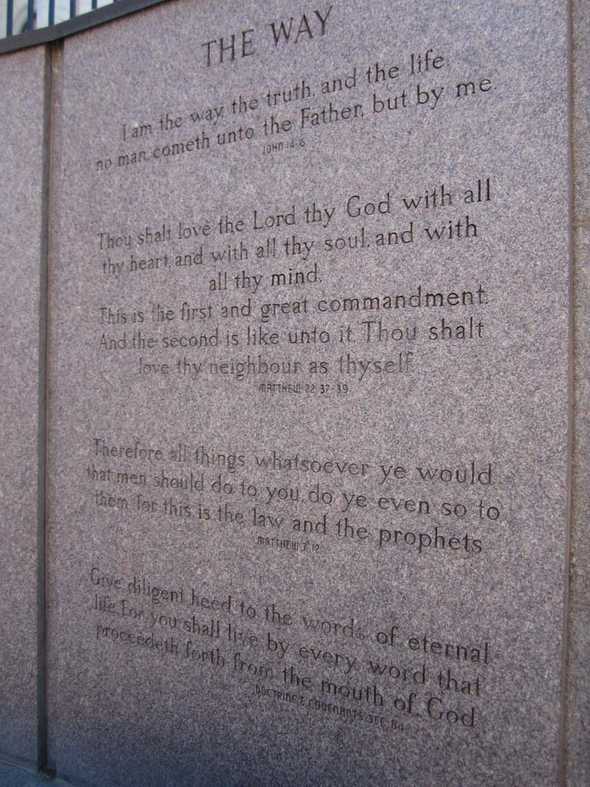 The Melchizedek Priesthood is the authority of God to lead His Church, give the gift of the Holy Ghost, and perform other saving ordinances. This authority has been on the earth whenever the Lord has revealed His gospel. It was lost from the earth after the death of Jesus’s Apostles, but was restored in May 1829, when the Apostles Peter, James, and John conferred it upon Joseph Smith and Oliver Cowdery. In the ordinances of the Melchizedek Priesthood, “the power of godliness is manifest” (Doctrine and Covenants 84:20). 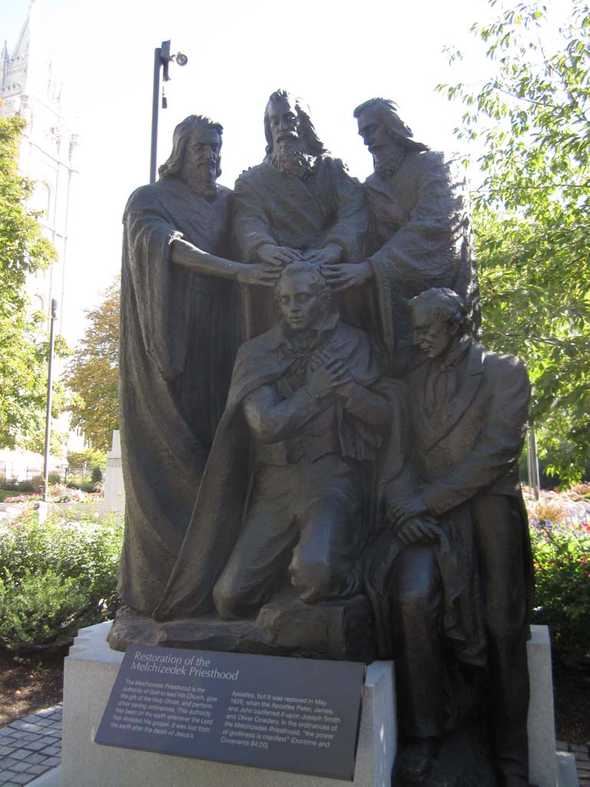 On May 15, 1829, Joseph Smith and Oliver Cowdery went into the woods to inquire of the Lord concerning baptism. As they prayed, “a messenger from heaven descended in a cloud of light” (Joseph Smith-History 1:68). This messenger was John the Baptist, who had baptized Jesus Christ in the River Jordan and was now a resurrected being. He laid his hands on Joseph and on Oliver and conferred upon each of them the Aaronic Priesthood. This priesthood, which had been absent from the earth for many centuries, includes the restored authority from God to baptize for the remission of sins. 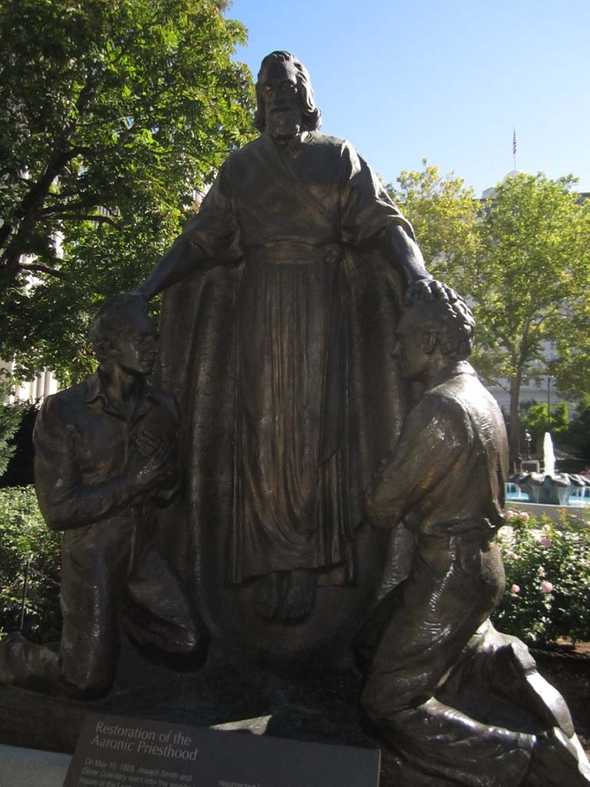 Be it known unto all nations, kindreds, tongues, and people unto who this work shall come, that we through the grace of God the Father, and our Lord Jesus Christ, have seen the plates which contain this record, which is a record of the people of Nephi, and also of the Lamanites, their brethren and also of the people of Jared who came from the tower of which hath been spoke; and we also know that they have been translated by the gift and power of God, for his voice haith declared it unto us; wherefore we know of a surety that the work is true. And we also testify that we have seen the engravings which are upon the plates; and they have been shown unto us by the power of God, and not of man. And we declare with words of soberness, that an angel of God came down from heaven, and he brought and laid before our eyes, that we beheld and saw the plates, and the engravings thereon; and we know that it is by the grace of God the Father, and our Lord Jesus Christ, that we beheld and bear record that these things are true; and it is marvellous in our eyes, never-the-less the voice of the Lord commanded us that we should bear record of it; wherefore, to be obedient unto the commandments of God, we bear testimony of these things. And we know that if we are faithful in Christ, we shall rid our garments of the blood of all men, and the found spotless before the judgement seat of Christ, and shall dwell with him eternally in the heavens And the honor be to the Father, and to the Son, and to the Holy Ghost, which is one God. Amen. Oliver Cowdery, Martin Harris, David Whitmer. 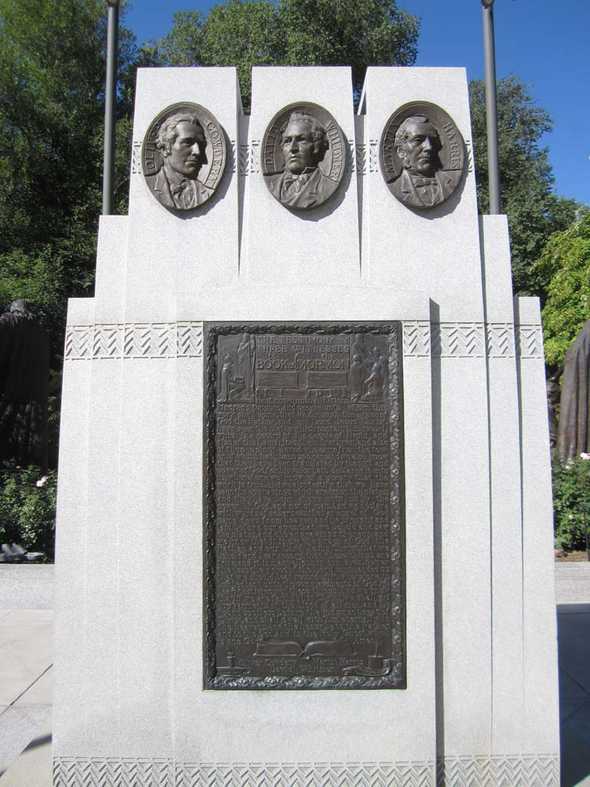 Hyrum Smith was thepatriarchand a witness of the Book of Mormon. He was an elder brother, friend, and counselor of Joseph Smith the Prophet. He was born at Tunbridge, Vermont on February 9th, 1800 and suffered martyrdom with the prophetat Carthage, Illinois on June 27th, 1844. 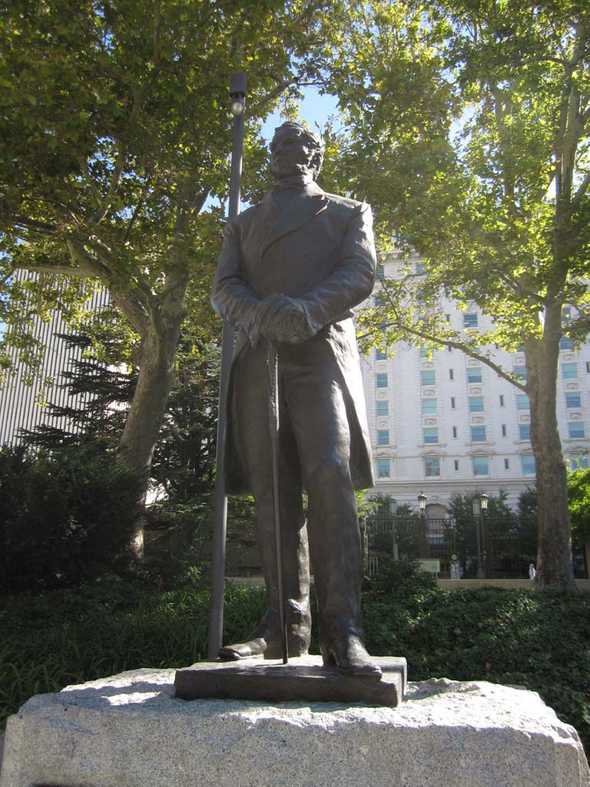 Joseph Smith was the Prophet of the new dispensation of the gospel of Jesus Christ our Lord. He was born at Sharon, Vermont on December 23rd, 1805. He suffered martyrdom for the word of God and the testimony of Jesus at Carthage, Illinois on June 27, 1844. 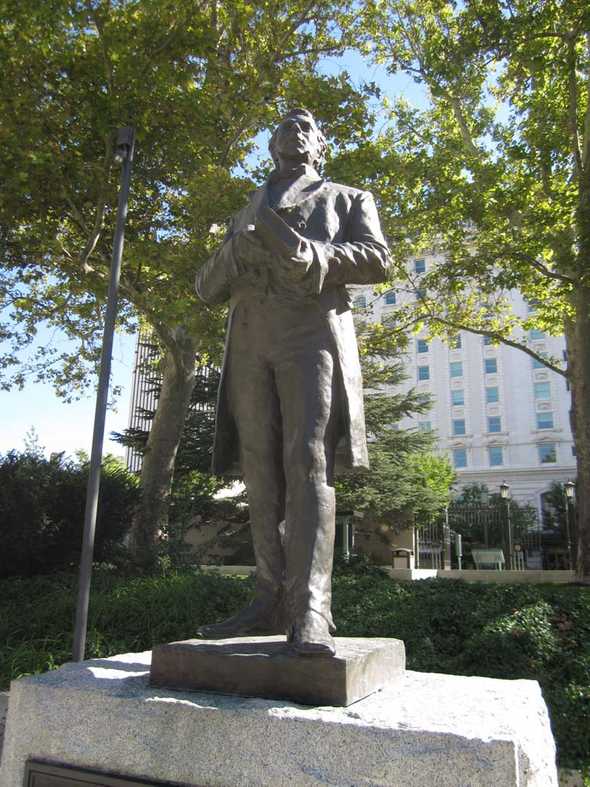 The Seagull Monument was erected in grateful remembrance of the Mercy of God to the mormon pioneers. 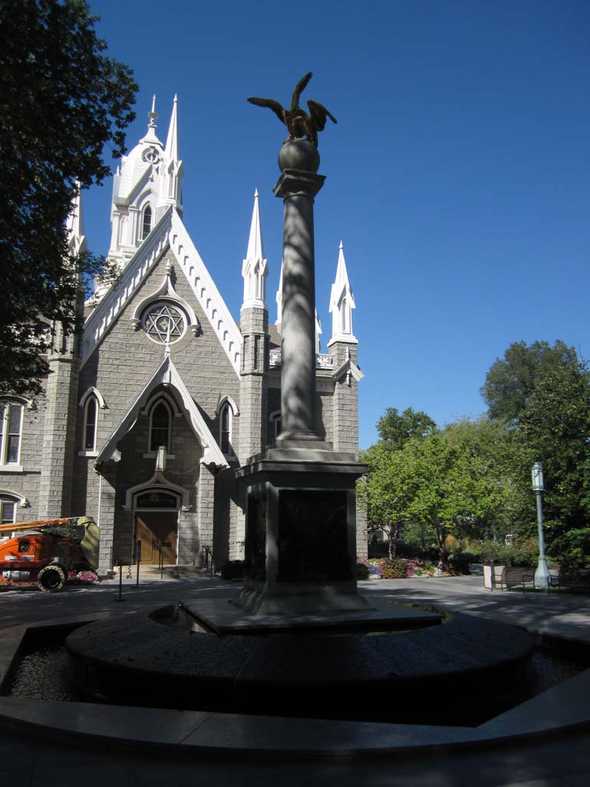 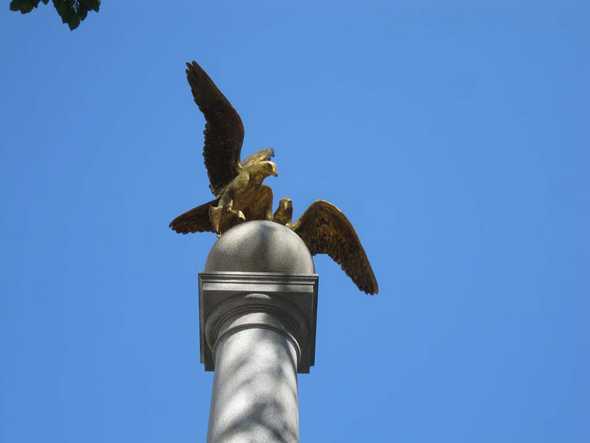 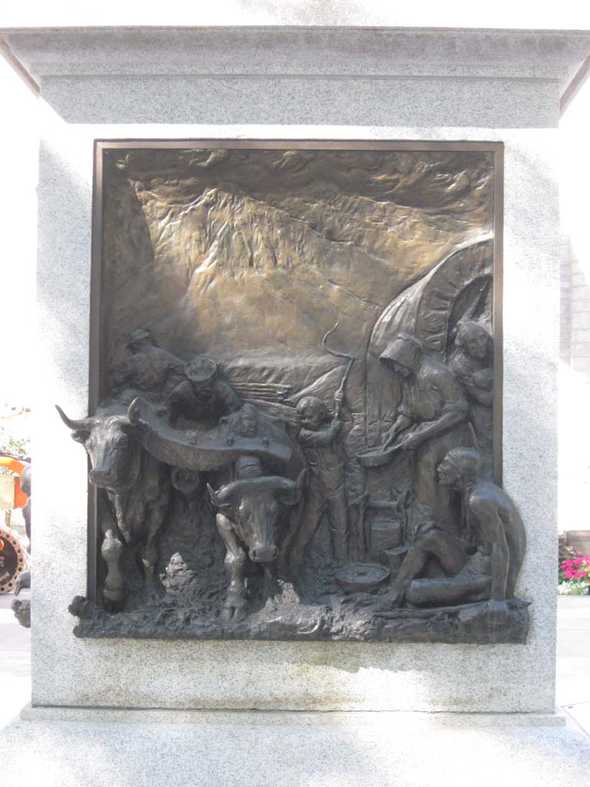 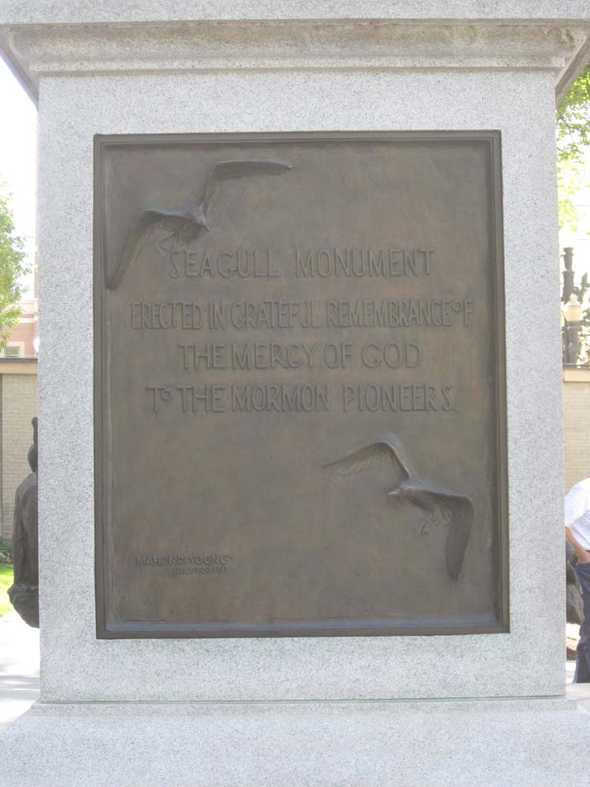 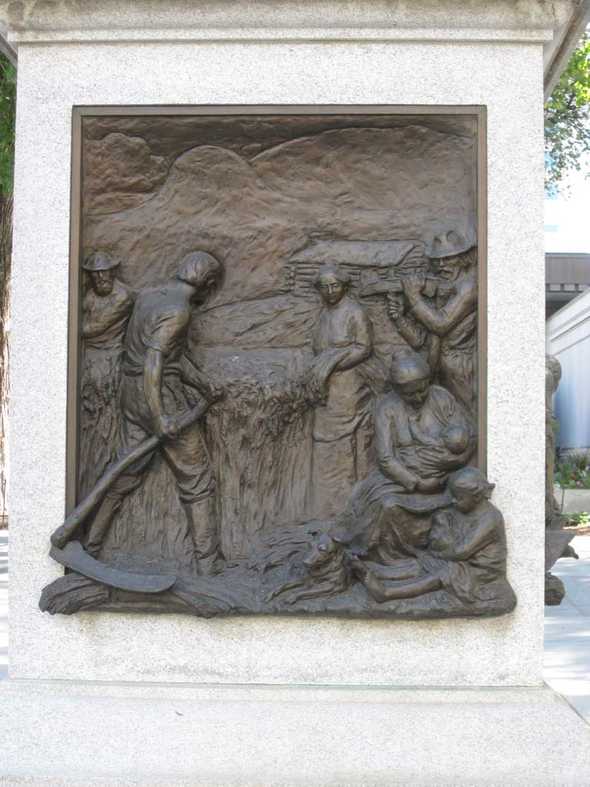 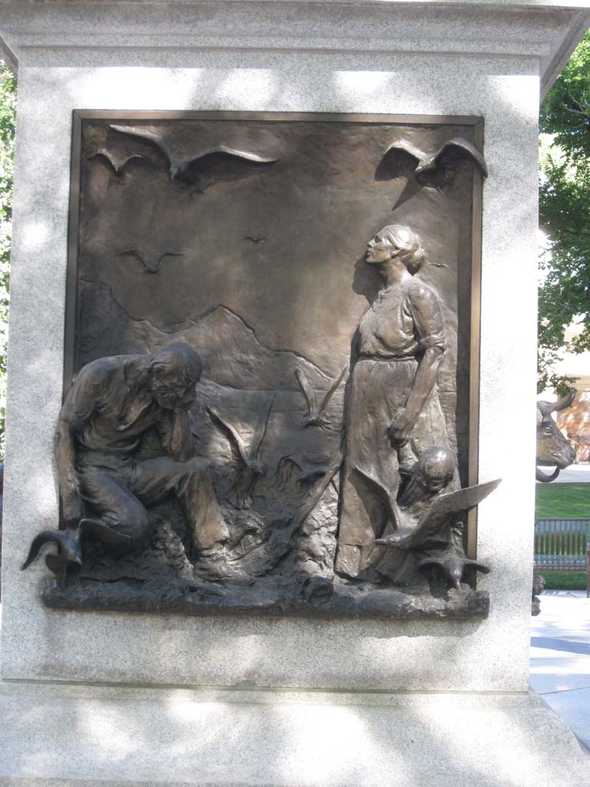 The Handcart Pioneer Monument is a tribute to the thousands of hardy Mormon pioneers who, beacuse they could not afford the larger ox-drawn wagons, waled across the rugged plains in the 1850s, pulling and pushing all of their possessions in handmade, all-wood handcarts. Some 250 died on the journey, but nearly 3,000, mostly British converts, completed the 1,350-mile trek from Iowa City, Iowa to the Salt Lake Valley. Many Latter-day Saints today proudly recount the trials and the triumphs of their ancestors who were among the Mormon handcart pioneers. 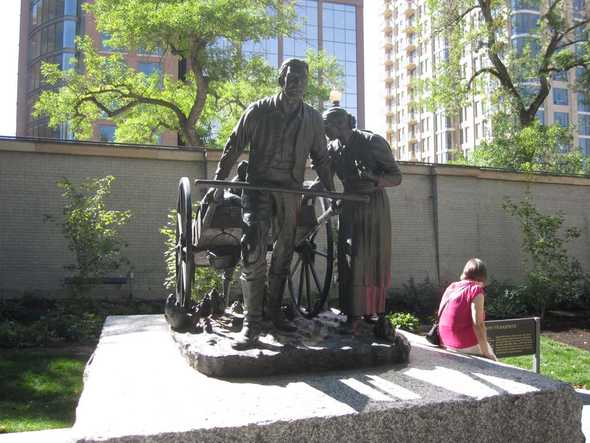 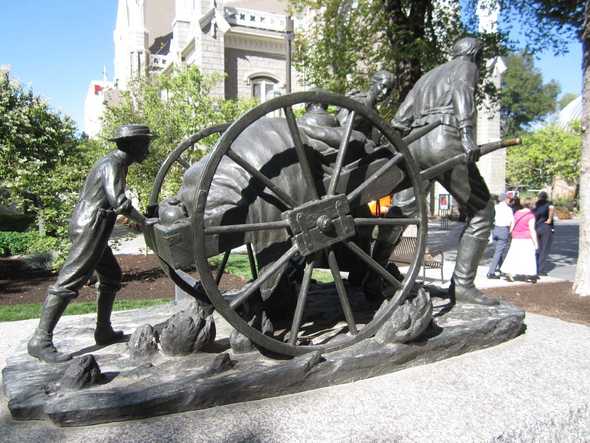 The Nauvoo Bell originally hung in the temple that Church members built in Nauvoo, Illinois in the 1840s. The Saints removed the bell in 1846 when they were forced to leave Illinois because of persecution. Following instructions from Brigham Young, the second company of pioneers carried the bell to the Salt Lake Valley. During their journey, they rang the bell to signal daybreak and departure and to warn that night sentries were on duty. The bell is now rung hourly as a symbol of religous free and is heard on KSL Radio. The monument honors the Relief Society, and organization founded on March 17, 184 for women of the Church. 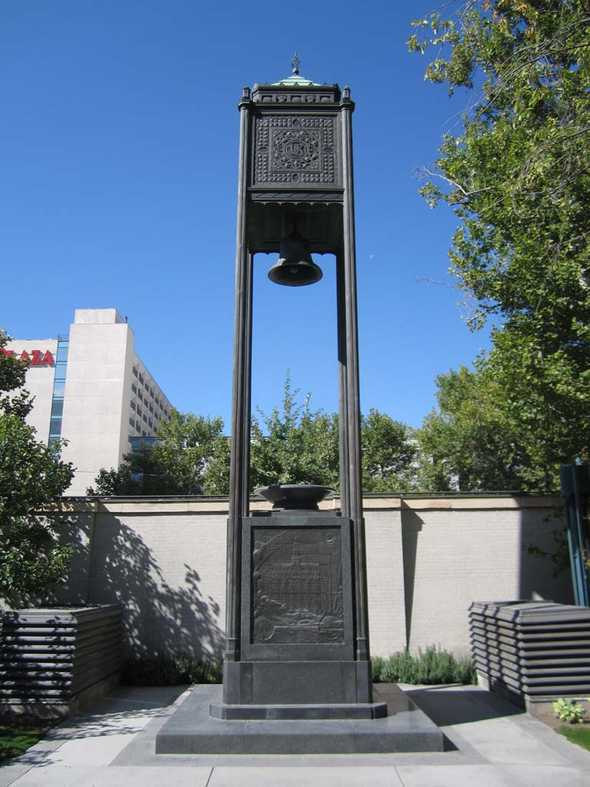 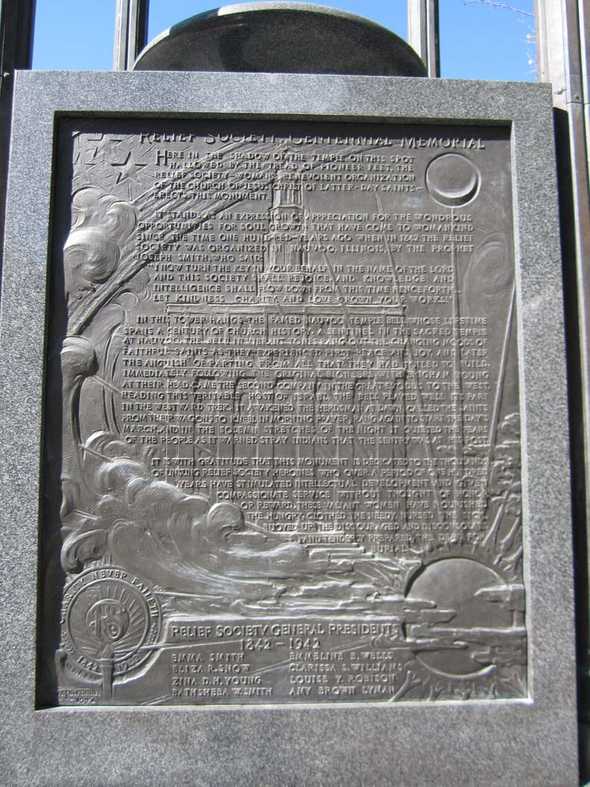 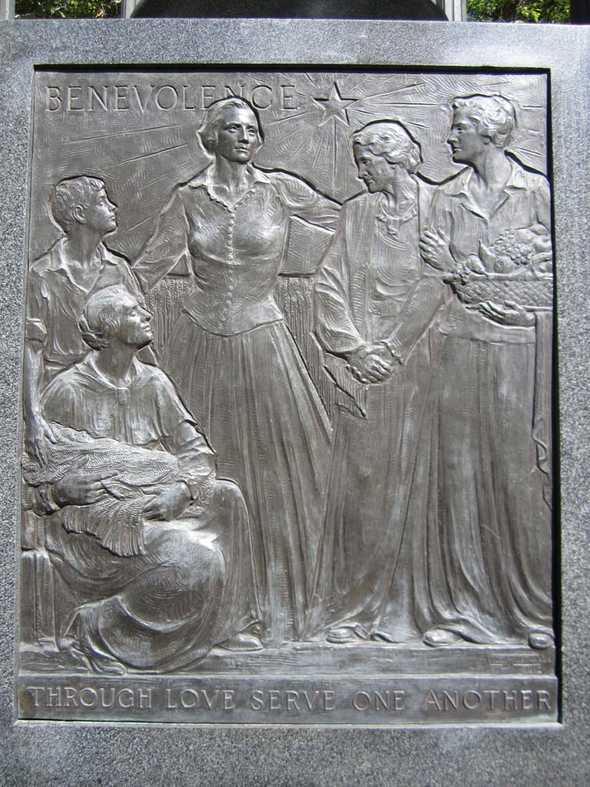 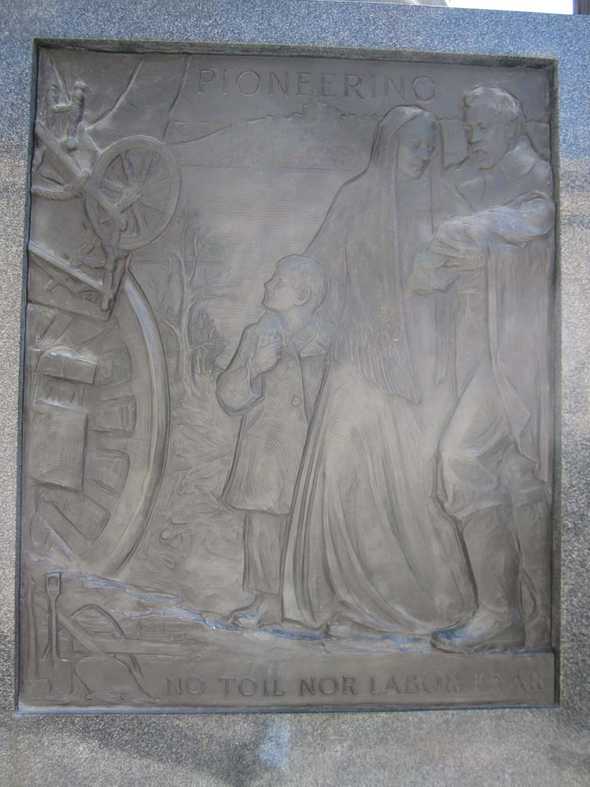 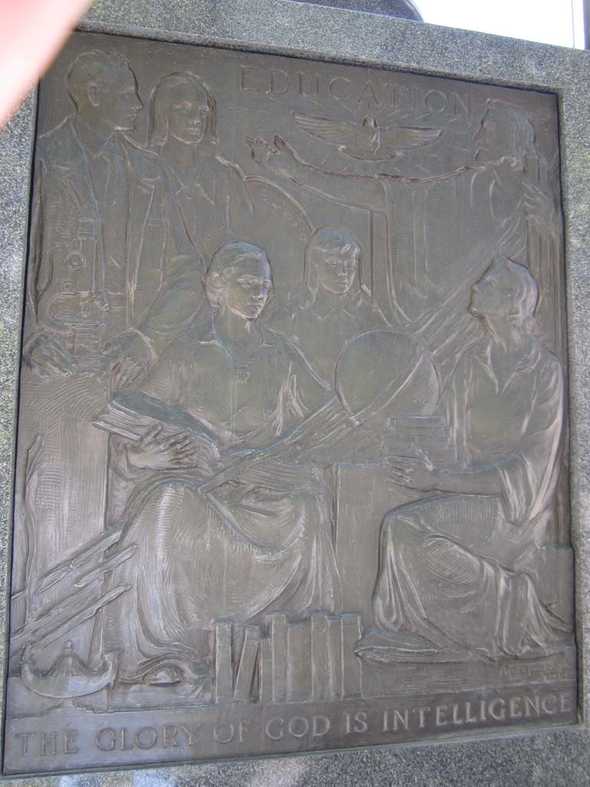